The estate is situated 3 kms north of the village of Châteauneuf-du-Pape, on the departmental road 68 toward Orange.

The vineyard is situated on the high tablelands which are characteristic of the northern area of the Chateauneuf-du-Pape domain. The terrain consists mainly of alpine diluvium and chalky miocenian soil with large flint pebbles covering the surface. These pebbles conserve the heat of the day during the night thus avoiding too much evaporation. Some parcels are planted around 1900 and contain the 13 varieties allowed in Châteauneuf-du-Pape vintage.

The histroy of the Winrey

The old building of Château Cabrières is located in the middle of the property, in the heart of the vineyard, it was built several centuries ago. Part of the castle and cellars date from the 17th century. The estate has been owned by the Agnes family since 1948.

The Arnaud family has owned the property for three generations. In 2009, Guy Arnaud handed over the estate to his daughter Agnes Arnaud married to Patrick Vernier and they took over the management of the business.

Agnès and Patrick met in Champagne in 1988, Patrick’s region of origin where he worked as a Champagne wine broker for twenty years.

Their two children Arnaud and Astrid also work on the estate, they are the fifth generation.

Philippe Cambie has been their consultant oenologist since 2010. He is an internationally recognized oenologist. In 2010, he was named oenologist of the year by Robert Parker. The following year, Wine Enthusiast magazine ranked him among the five oenologists of the year.

Wines rated 90+ by the international press 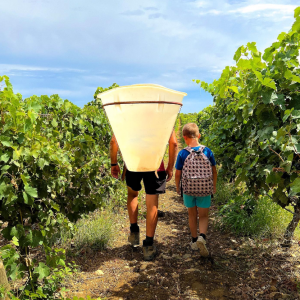