The vineyards of the Rhone Valley, which forms a corridor between the Mediterranean and Northern Europe, have been producing wines for at least 2000 years.

Today, Valréas is part of the Vaucluse, but totally enclosed within the Drôme département. The vineyards owe their distinctive qualities, which so impressed Pope John XXII in the 14th century, to the position of the hillsides, which are north and west-facing, at high altitudes. The predominantly clay soils, retain their coolness and humidity, and are less vulnerable to drought than those which experience the full force of the sun. The stream of cold air descending from the Alpine foothills further cools the vines.

Family vineyard of 60 ha on the heights of Valréas, Domaine du Séminaire is fully worked in organic farming with inclinations for biodynamic especially in the cellar where we use the lunar calendar. Today we have various varietals on the estate to produce our white, rosé and red wines: Grenache, Syrah, Mourvèdre, Carignan, Viognier, Roussanne, Marsanne, Clairette, Grenache Blanc…. The estate is located on the heights of Valréas between 300 and 400 m On clay and limestone soils and saffres. The wines are found very fresh and fruity with melted tannins.

“Wine is for me a family history, in the Pouizin family we are all winegrowers and bio! My grandfather taught me a lot and taught me to observe and take care of the plant… I’m the fourth generation on the field. Today my wines are the expression of the beautiful terroir and domain that my ancestors left me. Fresh, straight, Frank, fruity… it is also thanks to them that I am there thanks to what they taught me and to the care that they gave to their land…” Hervé Pouizin

Organic farming at the heart of our concerns 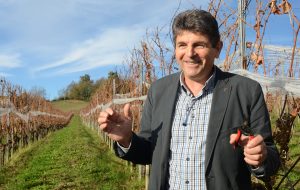